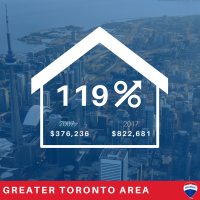 Housing market performance in the GTA has been remarkable. At the close of 2007, the GTA posted its best year with both sales and average price shattering existing records. However, just six months later, storm clouds gathered on the horizon, bringing in the financial crisis and subsequent recession. For a nine-month period, the market was slack and listings were coming on-stream at a rapid pace. By April of 2009, the worst was over and the GTA’s housing market was firing on all cylinders.

There have been some bumps along the way—including Kathleen Wynne’s Fair Housing Plan announced last April—but the market is still sound, characterized by healthy home-buying activity and more balanced market conditions. While current inventory levels are still low, they are nowhere close to the dismal numbers reported in the first quarter of 2017 when active listings had fallen to 7,865—the lowest level on record, with days on market hovering at 10.

Single-detached homes experienced some softening in demand, while condominium apartments and townhomes held the course in the latter half of 2017. Given price appreciation for freehold properties, condominiums remain the only affordable housing alternative for many purchasers. Not surprisingly, condominiums represented just over 36 per cent of overall residential sales in the GTA at year-end 2017.  While some first-time buyers will sacrifice size for location, there are many that will ultimately move north, east and west of the city to satisfy their needs for larger living spaces. Empty nesters and retirees are also figuring into the mix, sparking demand for larger units—especially in walkable neighbourhoods.  To this point, two condominium apartments priced at more than $5 million sold in the Annex in November.

Demand for luxury homes has also soared over the past decade, peaking in 2017 with 3,435 sales priced over $2 million. The top end of the market is expected to continue to experience growth as local buyers cash in on equity gains in recent years, and foreign buyers secure Canadian home ownership.

Moving forward, strong economic fundamentals will continue to support the GTA’s housing market.  Household formation in the GTA consistently exceeds the national rate of formation. Population growth continues to gather speed, increasing 9.2 per cent between 2006 and 2011, and a further 6.2 per cent between 2011 and 2016. Immigration will play an even greater role in that figure in coming years as the federal government raises its immigration allowance to more than 300,000 people annually. Amazon has just short-listed Toronto as the only Canadian market under consideration for its corporate headquarters (HQ2). Tourism posted its best year, bringing in more than $9 billion in 2017. Unemployment rates have fallen to 5.9 per cent in the Toronto CMA (December 2017). The International Monetary Fund just increased its forecast for GDP growth in Canada to 2.3 per cent. Canada has been named the second-best country in the world to live, second only to Switzerland, and Toronto has been ranked as the number one city in the world by many organizations in recent years.

The future bodes well for housing in the GTA. While the feeding frenzy is over, multiple offers still occur, but only on well-priced properties in hot pocket neighbourhoods. Seller’s markets remain in place in the 416 area code, especially south of Hwy. 401, while more balanced conditions have emerged in the 905 area code. By April and May, the traditional spring market should jumpstart 2018. Average price, however, is expected to remain on par with 2017 levels, hovering at $822,000.